where people come to laugh 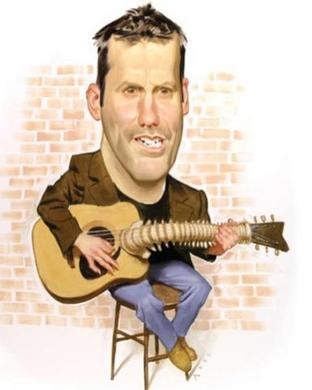 "One thing to remember is that even though every day may seem like a challenge,  it's all how you perceive it ~ let humor be the way!"

Tim Grill is a rising star on the comedy scene and is one of the funniest comics workingtoday! This hilarious East Coast comedian has been entertaining audiences from Philadelphia, New Jersey, Delaware and New York City all the way to Hollywood, California!

Tim has been heard on 94 WYSP's Opie and Anthony show, and 610 WIP Sports Radio in Philadelphia. Tim has also been featured on NBC Channel 10 News and on Comcast "Your Morning Philadelphia" TV program, and has opened for such headlining acts as Robert Kelly, Bill Dwyer, Orny Adams, Todd Glass, Artie Lange, and Jim Florentine.

Born with Spina Bifida, Tim was told he would never walk. Thirteen surgeries later, you will see him limp onto stage (hence "The Barely Can Stand-Up Comic") and deliver a powerful message that "laughter really is the best medicine!" Tim's perseverance and sense of humor has helped him become an extraordinary comic and motivational speaker.Growing up, I always thought of myself to be just like everyone else, except for one thing... I was born with Spina Bifida. In 1970, I was diagnosed with Spina Bifida which greatly affected the muscles and nerves in my lower back and legs. Who would have thought that I'd spend the next 18 years a patient at Shriners Hospital for Children in Philadelphia. When most kids are "just being kids," I was undergoing 13 surgeries all before the age of ten to help correct the effects that Spina Bifida left on me.Even though I couldnt walk as well as all the other kids, I always wanted to do what they were doing. When I climbed a tree, I stumbled. I rode a bike, I stumbled some more. I played baseball, I stumbled even more. As many times as I would stumble, I always managed to pick myself up making a joke or two along the way.

In 1979, my parents decided it was time to take me out of "special school" and have me "mainstreamed" into the regular educational system. It wasn't long before I discovered that "no, not everyone had braces, casts and crutches."  Imagine that!  I wasn't like everyone else, I was different. From this point on, I knew I was destined to do something that would make me stand out from the rest, just like I'd been doing my entire life.Not knowing where my life was going to take me, I decided that making others laugh was my dream. Following this dream, I am now a professional stand-up comedian or "barely can stand up comedian" who has performed all over the East Coast to as far away as the Comedy Store in Hollywood, California. I am also a motivational speaker who speaks on keeping your sense of humor while overcoming adversity.

​I have also created and wrote the webseries Cane and Able, (watch it here),  I am also an actor and singer/songwriter.